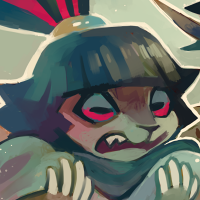 Cayenne is a talented young lad. He’s also very difficult to get along with. In addition of being harshly critical of everything and everyone, his pranks have been known to have cause injury to victims.

Cayenne made a poor judgment call in spending the last of his money to further someone else’s skills, neglecting his own in the process. He then came across a shill-in-the-audience scam, tried to intervene, and was violently booted out by the angry shoppers.

After he parted ways with Calliope, Cayenne ran into Min and Cress, who agreed to tell him where he could find lava ore in exchange for telling them the location of the local Hellside portal.

Later that evening, Cayenne was given a lava ore by Min and Cress. He left it where it was and brought Cress to fresh water, most likely saving her life. He was then yelled at by Min, who scolded him for leaving the lava ore unguarded and out in the open.

Cayenne was trapped by Luisa and Diane when he went to retrieve the lava ore, and was brought to Lionel to be tried and sentenced as a thief.

Cayenne narrowly avoided having his arm chopped off by Lionel, thanks to Calliope’s intervention. However, having decided he had had enough of workplace drama and politics and the way he had been continuously treated by his coworkers, tendered his immediate resignation.

While walking to Spoke, Cayenne wondered why the skies of Topside and Hellside were so different. He was then subjected to Calliope’s verbose storytelling, and was not enchanted by it in the slightest.

Cayenne also displayed his poor upbringing when he was not aware of many alleged classic Hellside stories, but did know “The Recital”, saving him from being totally ignorant.

Cayenne displayed his storytelling prowess by recanting the totally true and not made up at all and actually happened to him not too long ago “Blood Hammer” story.

In it, he had inadvertently purchased a cursed artifact from a shady merchant, but managed to disable the curse long enough to banish it to the depths of the ocean.

Calliope was taken aback by the sheer intensity and magnificence of the story, and decided to hang back and ponder it while Cayenne traveled onward to Spoke.