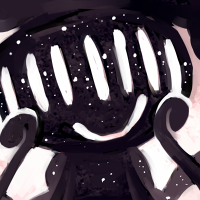 Calliope has been around for quite a while, now. She’s been up and down the continent of Owel, and has learned the culture, language and lore of every place she’s stayed. She’s extremely patient, which is probably how she’s able to maintain a friendship with Cayenne.

She forges artifacts. Good ones. She’s just not able to control what they actually (do). After having finished an artifact, she tends to compose a (very bad and not good at all) poem to commemorate the occasion.

Calliope pointed out to Cayenne that the scammers in the marketplace were Hanged Men, and were most likely related to each other. She then attempted to comfort Cayenne after he was unceremoniously booted out away from the auction.

Calliope presented a false yet believable story to Lionel, which saved Cayenne from being branded as a thief and having his arm chopped off.

She then quit shortly after Cayenne quit, citing the lack of good faith in the workplace as one of her main reasons.

Calliope attempted to educate Cayenne on the classic stories and history of Hellside, but he wasn’t very impressed by her efforts. Her further attempts were cut short when they heard a siren, signifying an angel attack.

Calliope was treated to a completely true and not made up at all story by Cayenne. She was bedazzled by his sheer skill in storytelling, and had to take some time to herself to absorb the tale after it was finished.