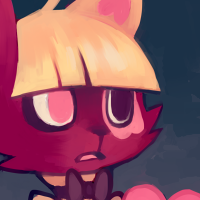 Commander of The Blinds. Had a different form in the past, but they don't talk about it much. They were a lot more fun to be around in the past, too. Why?

Beleth, with Biff's help, discovered the source of the disease. During the angel attack, they were instrumental in saving the lives of Median and her acquaintance.

Beleth informed volunteers that they were to instruct all Hellsiders to get to the nearest city/town/village/etc, and wait for mass-vaccination/curing. They told Topsiders to use their puppets in order to convince Hellsiders.

After being prescribed a week-long vacation by Median, Beleth met up with Biff and made future plans to see a couple of movies: Zombie 2 and Aliens High School Invasion.

After being robbed and reimbursed by Andre, Beleth underwent several hardships in order to purchase a weekend pass in order to attend Slide's Hellside Expo.

After Hellside Expo, they wanted to see what Biff's fascination with horror was all about, and gave Price's show a watch. They fell asleep partway through it, and had a dream about going to school.

After being terrified by Amdusias, Beleth confronted her. They had a scuffle over property rights, and Beleth ended up leaving the house after Pride's curse on Amdusias activated.

Later on, Beleth met Biff at a cafe and ordered a couple of drinks. Afterward, they both watched Zombie 2 and Aliens High School invasion. When the movie was over, Beleth re-dyed their fur in order to remove an unsightly stain, then went to Andre's building to report for work. Beleth was quarantined in a broom closet when it was apparent they contracted TBTE (Itchy Itchy disease), and, having lied to Median about the necessity of making a custom vaccine for their highly unusual body, was forced to be fired by Andre to prevent further spread of the disease.

Beleth was part of the assault team that drove back the angel atrocity. They displayed their skill in puppetry by summoning Dr. Nurse and Cat n' Fox.