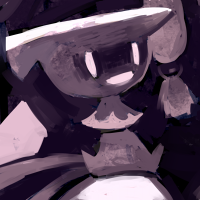 Ann lives a somewhat carefree life at Lionel's forge. He was extremely pleased with Ann's arrival - With her help, his output was doubled.

Ann first appeared, unnamed, in Chapter 3 when Cayenne described to Cress and Min what he wanted.

Ann was shocked by Cayenne's alleged theft of Lionel's property. Despite a lack of empathy towards the accused, she did not recommend death as their punishment.

She was visibly grieved by Calliope's decision to leave in the wake of Cayenne's incident.