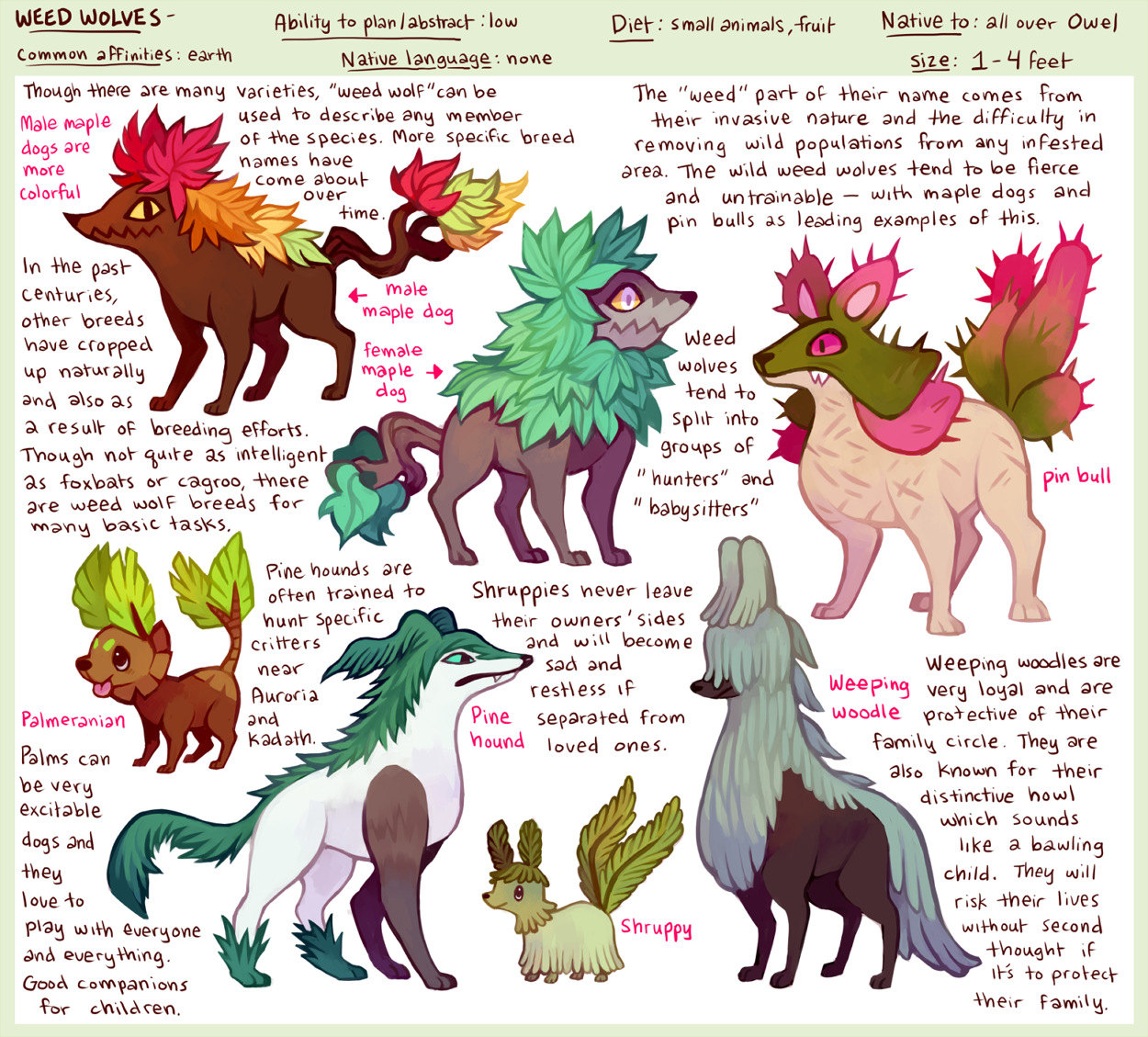 An animal-plant hybrid dog species that has split off over time into many different breeds. They function better in groups than they do individually, even if that group doesn't consist of solely other weed wolves.

Ability to reason: low; they tend to operate on instinct or by how they were trained

Climate preference: varies depending on plant life making up part of the body

Affinities: Earth, with cases of every other element having been reported except Spirit and its subtypes.

It takes a couple of generations for new elements to be introduced into a litter of weed wolves, which is about the same amount of time it takes for new plant life to appear in the litter's coats.

Weaknesses: Weed wolves are susceptible to Spirit and all of its subtypes. They are especially prone to charm spells.

Abilities: Most weed wolves can sense the needs of its group without being around the other members of the group. They will usually act on this to fulfill the pack's needs unless they have been trained not to. Weed wolves are especially good at forming connections with others, though the more feral and wild varieties will only form connections with those of the same breed, in most cases.

Weed wolves tend to have thick, leafy coats of "fur". They also can sport regular fur, though this is less common. Their skin is flexible but tough and can resemble bark in texture. They get a lot of nutrients from being in the sun and drinking water, but they do require additional nutrients from eating small animals and plants. This is especially the case if they are shedding their leaves in preparation for a new coat.

Weed wolves can reproduce with a handful of plant-based mammalian species via intercourse. They do not flower or spread seeds, and so cannot reproduce with animals that use more plant-like reproduction methods. Notable animals weed wolves can crossbreed with include: pommeranians, broccolambs, catermelons, pumpkits, and lettuce lions.

Weed wolves are notorious for being annoying and destructive. They are devastating in the wild if you're not prepared for them; they like to destroy caravans without an adequate number of merchants guarding them, and they will hunt down cagroo that get separated from these caravans. Though only some weed wolf breeds engage in breaking things for the fun of it, it gives larger breeds a bad stigma in places like Auroria where trading is important.

Despite this reputation, the nicer weed wolf breeds are excellent companions for anyone who needs someone constantly at their side. Weed wolves are very in tune to what their "pack" needs, which leads them to pick up on what their owners need. This makes the pet varieties very good anxiety-reducing animals.